The world has gone on lockdown.

Let’s have some fun and be playful with our thoughts.

I find myself at times fascinated with words from the German language.  Anyone who’s learned it as a non-native language can probably agree that the rules and structure of the language are frustrating, but words sure can be fun!

A friend shared this word with me in reference to all the people panic buying.  It’s a compound word where hamstern is either a verb for “to hoard” or a noun (das Hamstern) to mean “stockpiling” or the little creature “Hamster”. 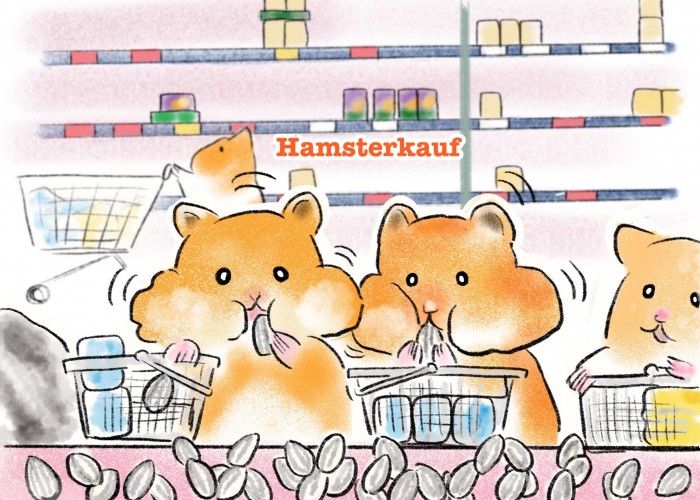 I asked a few other German friends what image comes to mind when they think of Hamsterkaufe, and on average, it’s a hamster stuffing its cheeks with the food it finds, because hey, why not store all this stuff for later? Right?

This term has been popping up around German social media and in a few articles. For some seemingly obvious reasons, people are panic buying, which equals: hoarding.  Now, will someone actually go through 20 bags of pasta by the time we’re all allowed to go back to the relative normalcy of life? I am so curious to know!

Like some of my favourite German words, this one is fun to say and fun to imagine.

One thing to be aware of that I haven’t seen in any articles: it seems to be contagious! Hamsterkauf happens during holiday times, for example, on Christmas when the stores are all about to close for one whole day.  In Germany, every Sunday all stores are closed, so sometimes people rush out on Saturday night to hamsterkaufe just those last few items for Sunday… in case.

The German language (as sometimes with the English language) combines two words – or more. Germans are infamous for combining words. In the case of two words, like our good friend Hamsterkauf, the formation is important.  The second element – kauf – is the primary word and it designates the larger set.  If the compound word is a noun, this second (or last) element designates the gender of the Artikel. While the first word is the determinative element. It designates the subset of the category that the primary word defines.

For example: das Wartezimmer.  The German word ‘Zimmer’ means ‘room’ and the gender is neutrum (use ‘das’).  The term ‘Warte’ means ‘wait’, so this informs the reader/listener that the word is the ‘waiting room’. Why is this important? So that you can understand what the word(s) mean.

Now, one new to German may find this terrifying to read, or ridiculous.  Mark Twain famously wrote about his curiosities with the German language in “The Awful German Language”. What I learned really early on with reading the German language – if the word seems overwhelmingly long, use your fingers to cover it up and sound out each one.  Donau (the Danube river is the second longest in Europe), Dampf (steam), Schiff (ship), Fahrt (driving), Gesellschaft (Association), Kapitän (Capitan). At the end, this word means the Danube Steamship Navigation Company Capitan.  One other good thing about the German language it is phonetic, unlike English which is notorious for words sounding different than their spelling, German almost always sounds how it is spelled.

Here’s a fun list of different compound words compiled. One of my favourites that a German friend taught me – Fremdschämen – which means the embarrassment you feel for someone else, and its literal meaning is ‘strange/foreign’ with the verb ‘to be ashamed’.  This is sort of similar to die Schadenfreude, there’s even a Guardian article about it (which comes from the author of a book on it!). Simply put, this German compound word refers to feeling joy at another’s mishaps.

Back to the Hamsterkauf: why the panic buying?

I was startled returning from a holiday of nearly one month and struggled to find products like toilet paper. I was interested in why this was happening.  What did I do? My usual: research and read.  The psychology behind panic buying and thinking through potential ramifications.

At the beginning of this article I noted how Germans have a specific term for when one goes and panic buys stuff, maybe because of a potential disaster, because of holidays, or whatever. It’s often impulsive and unplanned.  I will first admit, I also (two days after returning home) did a bit of Hamsterkaufen. I went to the supermarket and bought 6 cans of mixed fruit and vegetables. In the last two years of living in Germany, I never purchased canned produce. Also, once I found toilet paper (guilty here), I bought a second pack.  In Germany, I’m used to a package of toilet paper consisting of 8 rolls. But did I need this second pack? At least this I know I will use in the coming weeks, but the canned goods, well, since I’ve gone two years without eating them, I can safely assume I still won’t (unless disaster sets in and I run out of other food without the option of going to get more).

I was also incredibly perplexed by the panic buying in North America.

A family member sent me a photo of an entirely empty aisle in the Superstore – which is the size of a hardware store in the city I live in. How, how, HOW, in these countries with consumer abundance did they run out of items?! I mean, what? Maybe I was jet-lagged I thought, this is surreal, how is there any sensical order to this.  Is it FOMO (fear of missing out), concern, despair? I guess it depends on the person. Since then, I have been told that, in at least a couple of cities in Ontario, grocers have limited purchases to one of any item to try to keep shelves stocked.  Lest we forget, there are many in our communities that do not have the financial means to panic buy a garage full of hand sanitizer, or can’t simply go driving to this, that, and whatever store to buy more.

There are different reasons: feeling a sense of control in the face of uncertainty, doing it because everyone else is (lemmings), to prepare for the future, and so on.  Let’s manage our anxiety.

Positivity in the face of adversity. I feel like I’ve become a personal chef.  Since returning to this world gone bananas state of life, I have been cooking up a storm! This means that I’ve also been eating more well-balanced and nutritious meals than I was when rushing out of the house for work or procrastinating other things. I already love cooking and baking, and now it feels like there’s more time for this. Exploring the language of the culture I’m living in, reading and writing more, continuing to enjoy walks – life is good.

My most recent motto: Care bear stare. In the meantime, what words do you find fun and curious in English or other languages?

One thought on “Times of the Hamsterkauf”