The buds have been blossoming, the trees, becoming vibrant and vividly green, once again.  The birds sing louder than what could be heard during the grey months of Winter in Germany.

It’s been one year since moving to Germany from Canada.

This is the second semester I have had the opportunity to teach at two different Fachhochschules (colleges/universities of applied sciences) in Germany, and recently learned that one has a department for Sign Language Interpreters.  This, along with reading one of my students’ essays on intercultural communication and the differences between the sign-language and spoken-language cultures of Germany, has helped me reflect on this last year through my five senses.

My parents tell me that as a wee-little one, I could understand both Portuguese and German (the languages of my mixed family). That when I started Kindergarten, I refused to speak anything other than English – because that’s what everyone else spoke.  I wish that my parents still kept these languages in the house for my development. Although, I can understand why it was easier not to. My mom, still spoke Portuguese on the phone with relatives or when we would visit them. My grandparents on my dad’s side of the family left Germany after WWII and were some of the many Germans who left their homeland and they chose to adapt to the language of the culture they were living in: English. 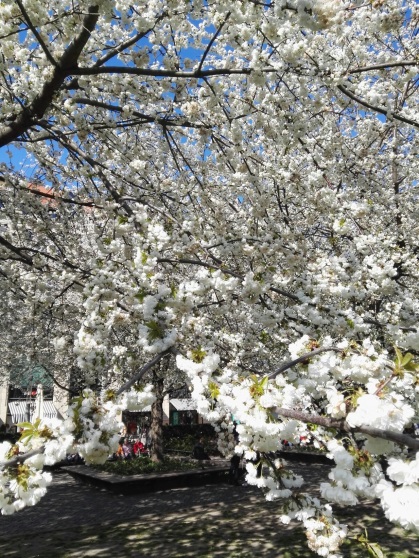 Some years later, living in Germany, I still enjoy the sounds of German. Not particularly the Sachsen dialekt, but das Hochdeutsch.  While visiting Copenhagen recently, I liked hearing the sounds of Danish speakers. I also learned that I particularly enjoy hearing Danish accents in English, now – generalization – most Danes speak fluent English and hardly have an accent. I was able to pick-up on subtle tonal differences in pronunciations. I’ve also figured out about myself, I tend to like languages that aren’t the most popular: German, Danish, Swedish, South African, Russian.  The sounds made in these languages are what I tend to find most intriguing.

Recently, again I can attribute this itch-interest to a student’s essay, I thought that learning some Mandarin might be compelling. In this essay, the student was writing about language and thought – thanks to our class’s exploration of Lera Boroditsky’s TED talk in relation to linguistic relativism and linguistic determinism. This student discusses the high-context approach to language and expression that Mandarin speakers use, likely in part because of their highly visualized language made of pictographs. For example, the Chinese characters “山”, which means mountains, looks like rolling peaks. Or how people speaking Mandarin will often use “we” when talking, whereas in North American cultures, “I” is more often used. Cultures are shaped by the languages that are used, while the language is also influenced by the culture (think Denglish).

I am curious what makes a person find a language interesting or not. I don’t particularly find the typical Romantics beautiful like many people do. I moved to Germany because I wanted to learn the language and experience the culture here. I’ve learned some of the language and that there are many different cultures within the country (just like in Canada, and, I’m sure, every other country).  Always a student myself too, I feel pretty happy when I can have a successful conversation in Germany.  It would be pretty amazing to read one of the greats in their original language of German, maybe one day, I’ll also be able to read a bit in another language. There’s the saying in English, lost in translation, for a reason.

I’ve written about walking before. When you’re moving slower, your eyes can take in more of the surroundings. I love that I can walk through the park just a street away from my home and watch children play, parents taking strollers out, the ducks on the water, people canoeing or kayaking down the river, the flow of the water, friends and family meeting and connecting in this green space.  It’s beautiful. Taking in your surroundings and pausing with those images, it opens up so much thought. 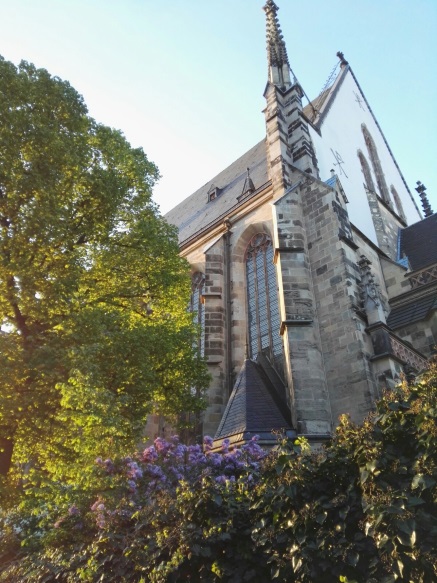 Arriving to this lovely city one year ago, my eyes had to adjust to their new surroundings.  I have now become accustomed to walking down streets full of 4-5-storey apartment blocks of buildings easily 100+ years old. Have I become comfortable with the different types of cobblestone streets? My feet would answer no, but my eyes would answer yes.  Once in a while, I’ll have a Captain Cook, and think, am I aware of all of these things around me.  Recently purchasing some plants to move into some domestication, I now view the living room around me with a different view: there’s green life in here.

I sometimes classify myself as ‘directionally challenged’, somehow I seem unaware of my surroundings at times in part, because I heavily rely on maps.  Especially in the last few years with a growing dependence on Google Maps. Spacial awareness is something that I never was great at grasping, I even used to turn paper maps to face the direction I was heading.  Proper directions, for example: head North for about 200 metres, then move west on As-If-Strasse for another 150 metres, and then you’ll arrive, have never been something I could follow.  As my Smartphone ages and the battery lessens, I have become a little more prepared to brave the streets that I already know without that screen in my eye-line.

Food, drinks, I love them both.  Read some other articles on the Leipzig Glocal, where I fancy writing about food and drink experiences while living in this country, and visiting others. 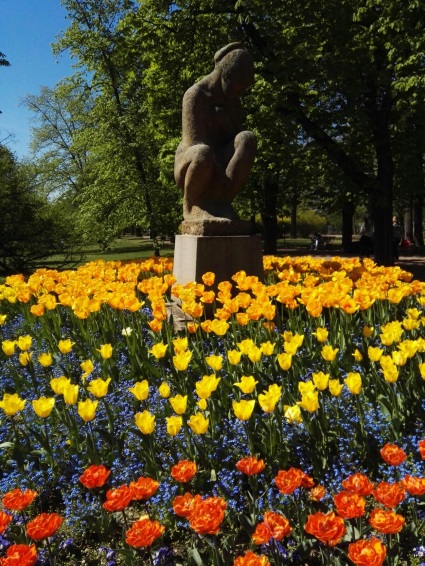 For anyone who knows me IRL, they can attest to the fact that growing up I was a hella ‘picky’ eater.  My teenage years basically consisted of plain pasta with butter and Parmesan cheese, lots of chocolate and cookies, strawberries, bananas, and grapes, and cheese and crackers (yes, I love Triscuits).  As the years continue, my eating habits have developed.

The first time I came to Europe I was 18-years-old. I had a lot of ‘firsts’ during that trip, let alone it being the first trip I took sans parents.  My sister and I were visiting Amsterdam and we decided to splurge one evening for dinner and go eat on a boat! Because, hey, eating on a boat restaurant is way cool! Now, think about this for a second: Amsterdam – a port city, on the water; a restaurant – on the water. What was the majority of dishes filled with? Fisch! My choices for dinner were fish or steak. I ate roast beef and hamburgers by this age in my life, so I opted to order a steak for dinner.  And you know, it was mighty delicious!

Since moving to Germany: I’ve begun eating brussel sprouts – and not minding the taste so much anymore, especially when shredded and cooked with crushed pistachios and dried cranberries. I also eat prosciutto now, more rice than I ever did in Canada, much more avocado, almonds, and summer watermelon.  Adventures in eating. I already had a keen taste for certain German foods, having grown up with them, such as Rinderroulade, kartoffelpoffer, kartoffelkloese, und schnitzel. Another food I find acceptable since moving here is rotkohl – red cabbage. For that one though, only when it’s mixed with apple; it helps add some sweetness to the tart vegetable.

Trying food specific to different cultures always makes for a good story, or maybe even something to add to the pallet!

I’m a hugger. I love hugs, I think I’ve always loved hugs. I have this fabulous memory from my first year in secondary school.  A friend and I ran towards each other, obnoxiously screaming with excitement, and then touching in a tight embrace – in the school cafeteria at lunch.  It didn’t matter to us that anyone looked at us or heard us. We wanted to hug, and so we did, with great vigour. 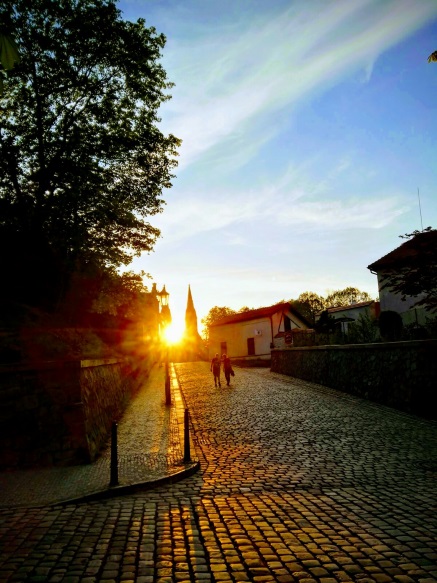 Germans often use handshakes. I think it fits with the cultural experiences of the German language and how there’s a distinction between a formal ‘you’ ‘Sie’ and the informal ‘you’ ‘du’. I have never shook so many hands as I have in the last year in Germany!  A colleague, who was running a conference for researchers and students visiting Germany from around the world told me that he learned that Germans hug in a certain way. He shared the story with me.  He had asked one of the PhD researchers who’s studying language to lead an icebreaker/welcome session for the participants. The researcher focused on greetings in other languages, and he said that he never realized before: Germans put one foot in front of a hug.  It’s only the upper body that is close to the other person while the lower half of you is still a safe distance away.

When I was a child, and my sister was essentially suffocating me with hugs, I couldn’t run away fast enough. In some cultures, friends hold hands while walking down the street (strictly platonic touch). In other cultures, you keep a certain physical distance from the people around you. Having physical touch interactions with others has been proven in many studies to help the human condition. The ways in which people within different cultures interact with their loved ones or with strangers is also an appealing topic.

Bloodhound here. As far back as I can remember, people have commented on my sense of smell – I have a strong one.  From being able to smell the Farmdüngung in the countryside well before anyone else’s nose picks it up to living through constant congestion growing up; my nose is powerful. 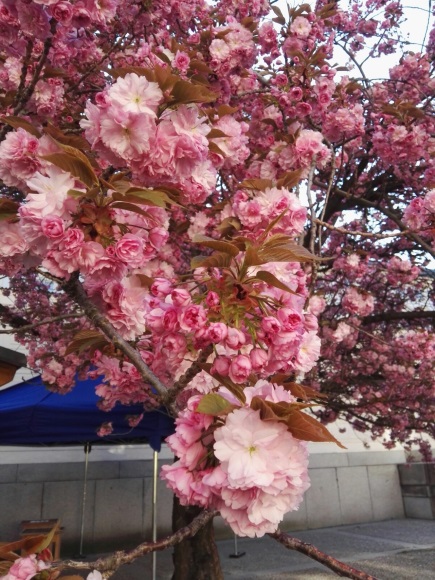 As Spring was really coming into effect here, I was walking through the park and I started to recognize that my nose would get sniffly the more I was around the growing amounts of pollen. It seems a lot of thoughts come from my walks through the green spaces in this city.  Sometimes smell can create a negative experience, like when walking through a large city and smelling diesel or other traffic engine scents. The scents that people create themselves, either through their natural body or by artificial scents sprayed can create a powerful experience as well.

I love the smell of fresh flowers in Spring, the outside air after a heavy rain, saltwater when the sun is hitting it while on the beach, garlic cooking in butter, cake baking in an oven, and so much more.  Smell is such a strong sense for me, but it’s often the most neglected of the senses.

While visiting a friend in Prague over Easter, we would literally stop to smell the flowers along our walks.  We discussed how much they love the smell of lilacs and lavender in Spring, and you had your pick of wild purple to stop for.  Smell powerfully ties in with both taste and sight. On it’s own though, with your eyes closed and your mouth closed, taking in a big breath of air around you and picking out the different scents creates other experiences.  When out walking, your nose gets to explore all of its surroundings too. I love that I can stop in my tracks and smell what’s around me.

Making Sense of the Senses

The smells, views, sounds, tastes, and touches of the last year have helped to create incredible and sometimes incredibly strong memories.  The ways in which bodies and brains work will always be a scientific mystery, although there are many studies that have shed some light.

2 thoughts on “The Five Senses: Reflections” 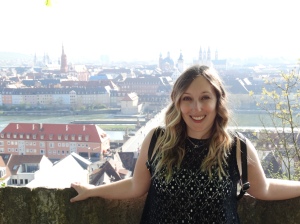